The Hillsboro City Council has selected Interim City Manager Robby Hammond to become Hillsboro’s next City Manager, serving at the direction of the City Council. The Council’s unanimous decision follows a nationwide recruitment that attracted 37 City Manager applicants from across the country.

“As a Council, we were in a position of strength, choosing from such high-quality leaders. In the end, we were united in our strong belief that Robby Hammond is the best person to lead Hillsboro,” said Mayor Steve Callaway. “In Robby, we have a person who is part of our community and who is committed to Hillsboro’s successful future.

“We have a leader who has now served as Interim City Manager for seven months. Robby has led our organization with skill and expertise. He is respected and supported throughout the community.”

“I am excited and honored to be selected as Hillsboro’s next City Manager, and grateful for the tremendous support I have received during the last eight months,” Hammond said. “My family and I love to call Hillsboro home. Hillsboro is large enough to provide so many incredible amenities and city services, while still maintaining a strong sense of community. We have excellent police and fire services, and our parks and libraries are amazing. We are also a vibrant and welcoming community with tremendous diversity.

“Hillsboro has a strong reputation of forward thinking and strategic planning, which has prepared us well for our current and future growth. All of these attributes make Hillsboro ideal for me, both personally and professionally, and I am grateful to be a part of this community.”

Hammond has both a master’s degree in public administration and a bachelor’s degree in city planning and resource management from Brigham Young University.

The recruitment process
Earlier this year, the City Council called for a nationwide search to recruit Hillsboro’s next City Manager. In April, City Councilors held listening tours at four community gathering places to hear recommendations from community members about what to look for in a City Manager. “The Council has worked diligently and thoroughly to make sure the community’s priorities and desires have been a part of the process throughout,” Callaway said. In May, the City launched its national recruitment effort with a recruitment video and a position profile developed by the City Council with input from community members, community partners, and City staff. 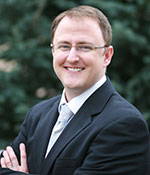 Council President Fred Nachtigal:
“After an in-depth search, Robby rose to the top of a large group of well qualified candidates. He has demonstrated his leadership ability and understanding of both Hillsboro and the Council’s vision, throughout his time as Assistant City Manager and, more recently and importantly, his time as Interim City Manager. Robby is extremely well qualified for the position — in temperament, education, and experience — and I very much look forward to working with him, into the future.”

Councilor Olivia Alcaire:
“Following a nationwide search, Robby Hammond is the right choice for City Manager because of his leadership with staff, support of the Council, and his commitment to equity and inclusion that will continue to make Hillsboro the best place to live, work, and play.”

Councilor Kyle Allen:
“I’m proud that after an intensive national search, we found such an incredible leader for our city right in our own backyard. I’m looking forward to Robby’s continued service to Hillsboro and the positive leadership he has demonstrated that makes our city a great place to live. Robby has extensive management experience at several levels of city government, both in Hillsboro and in other states. We are so lucky to have such a thoughtful and dynamic leader serving our city.”

Councilor Anthony Martin:
“Robby has done a great job of incorporating community and Council priorities into how the City operates. This includes the Draft Equity Statement and identifying Council priorities in the City’s budget. With Robby, I look forward to continuing to ensure the City reflects the values and visions of the community and Council.”

Councilor Beach Pace:
“The candidate pool was highly competitive and I feel great about selecting Robby as our new City Manager. Over the past seven months, he has performed well as the Interim City Manager. I am excited to continue working with him, both individually and as part of the Council. Robby has the experience and the desire to innovate and take on new areas of growth, including our diversity, equity, and inclusion (DEI) work. This will enable him to lead the City staff powerfully into the future.”

Councilor Rick Van Beveren:
“During his tenure as Interim City Manager, Robby Hammond demonstrated his considerable management and leadership skills. He has done an excellent job, keeping and even accelerating the key initiatives the City has undertaken, while earning the trust and confidence of Councilors, senior leadership, staff, and the community members he serves. As City Manager, Robby will provide steady, competent, fiscally responsible, and principled leadership as Hillsboro grows into an even brighter future.”

Read the original story on the City of Hillsboro website.